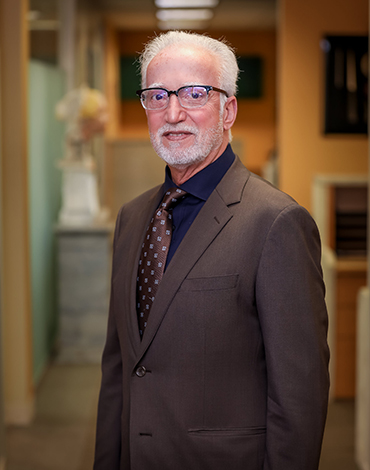 Sarkis Ourfalian, while working for Rafi Ourfalian during the day, attended law school at night and graduated with a Juris Doctor degree from U.W. L.A. in June 1987. Sarkis originally had wanted to be a chemist and did, in fact, study chemistry as an undergraduate; however, while doing a part-time stint as a law clerk at the Law Offices of Rafi Ourfalian, he fell in love with the legal practice and switched unto a career in law.

Since then, Sarkis, initially an associate at the Law Offices of Rafi Ourfalian, in a few short years was already performing the position of senior associate, then managing attorney. By 1998, Sarkis became a partner to the renamed firm of Ourfalian & Ourfalian.

Throughout his career, Sarkis has been active in civic and community affairs and holds memberships in many civic and charitable organizations and professional associations. Sarkis is certified to practice law in both California and federal courts.

Experienced and highly skilled, Sarkis enjoys the respect and support of both clients and peers. For many clients, Sarkis has been the calming influence, the extended hand, the friend, and advisor in their time of need and distress.

Additionally, over the span of his career, he has acted as a mediator and settlement officer on various court-sponsored programs.

Currently, in addition to his work at the law firm, he serves as Chairperson of the Board of Regents of the Prelacy Armenian Schools and has previously served as a member of the Foundation Board of the Glendale Memorial Hospital, among many other charitable and community organizations.

Questions About a Recent Injury or Other Legal Matter?